Saturday 11th July saw the inaugural Kishorn Cup take place in, of course Loch Kishorn. Lochcarron Sailing Club invited other neighbouring clubs to take part in the event and were delighted to have two yachts from Plockton join the fleet, giving a grand total of 9 yachts competing – a club record! (See photographs on the next page).

Meridian, captained by David Johnson and Lilian, took its role as committee boat and for that, many thanks. Light winds from the north-east made for an interesting start line, some yachts seeking wind off the shore and finding none, with others jockeying to a near collision at the committee boat.

A close start for Mhojo, Pegasus, Playtime and Ella...

Monkey Business, the sleek Sigma from Plockton stormed down the loch taking an early lead that was never to be lost. As spinnakers were hoisted (some upside-down!) all boats struggled to keep the kites full in the light air, but made good headway towards Kishorn Island, the fleet well-spread out. After some fancy sailing around just-hidden rocks, the boats rounded the leeward mark at Scottish Seafarms North Shore, before starting an exciting beat back up the loch. With increasing winds, the boats at the back of the fleet began cat-and mouse tacking with the front boats, some gaining good ground and one or two crossing the finish line to a photo-finish.

After consulting the competing yachts, the Race Officer announced the decision to shorten the course to one lap due to light winds, although Monkey Business had already managed to navigate the course twice, demonstrating her no-nonsense, speedy tactics! After time corrections on handicap, the results were, 1st Monkey Business, 2nd Scamander, 3rd Ella, followed by Pegasus, Pointer, Freyja, Sebrijo, Mhojo and Playtime.

Rafted up for the BBQ. 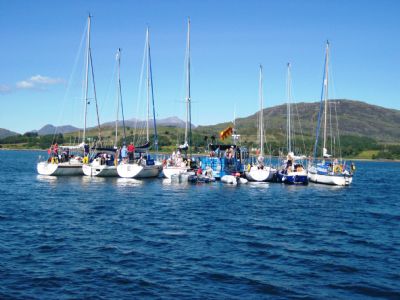 David Johnson had lit the BBQ’s and by the time all 9 boats were rafted together either side of Meridian, the bangers and burgers were well under way. Race Officer, Jenny Hendry presented the silver quaich to David Finlayson of Monkey Business, who filled it with whisky and passed it round to the whole fleet. A great day for the first Kishorn Cup and thanks go to Monkey Business and Freyja for joining from Plockton, David and Lilian for providing the committee boat and wonderful hospitality, Jenny Hendry for her accurate Race Officer skills, all the local yachts who competed and last but not least, to John Murphy and Graham Smith for dreaming up the idea and organising the event – here’s to next year!